One of the biggest reasons I decided to begin blogging here was because of a film I saw the other night. 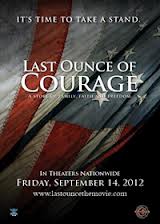 Last Ounce of Courage: it was a good movie, but not one I would see in theaters if given the choice again.

However, it did make me leave the theater knowing I have to do something.


It is essentially about the mayor of a small town who realizes that it is not against the law for the city to display Christmas decorations; it's a federal holiday after all. He does lots of research and decides to do it.

He is shut down by an organization which reminds me an awful lot of the ACLU.....but after being fired as mayor he decides he can do more. (I will not spoil it, however).

Later, at the school "Winter Play", the students hijack it and turn it into a Christmas play, but it is interrupted by the mayor's grandson. The boy, Christian, shows a short film of his father who was KIA before he even met him. In the film he shows, the father talks about how over there (Afghanistan I believe) people can not celebrate Christmas. It is a very moving scene and redeems the entire film which I thought was sort of disordered in its plot structure, but I digress.

Burt it did leave me with the feeling that we have to do something. Let's just hope we aren't too late.